With that AA that the Parhelia had, the image quality, and inovations, they should still be in the Matrox QID Pro Graphics. I think that perhaps now that microsoft has unified DX10 setings, and Vista will be using a lot of 3D power, they got the incentive to develop a new GPU, so I wish.

Even S3 is betting high with new line of cards, for the XGI I fell sory, if they worked out their drivers to work with major aplications, they could have grown I heard they are strong in AsiaI like Nvidia and ATI, but more competitors in the race would be awesome. TheGreatGrapeApe Dec Matrox QID Pro Graphics, Its Very Sad Indeed that Matrox just steped out of gaming cards.

Fragment AA an SurroundGaming were their strongpoints, raw power wasn't. But now driver support is their big weakness. Well they are forced Matrox QID Pro Graphics make a new card for Vista if they want to continue making cards for current builds.

They are expected to launch something next summer though, just like S3. XGI will never come back as anything more than another niche player, if that.

That means only S3 can be the third player. TheGreatGrapeApe Oct 22,1: The only area they still may have the argument as to being better would be the VGA segment, and even that is a minior difference at best. As for their other products I allude to that in the rest of my comments, but that is truely the niche segment of their solutions, they need at least an Matrox QID Pro Graphics level card IMO for HD acceleration.

If matrox really wants to stay in the desktop segment at all, chances are these are all things they are thinking about, Simply put the OS is not a niche product, well windows isnt anyhow, if any company wants to stay onboard with the single most popular Matrox QID Pro Graphics they will do what they gotta do. Matrox QID Pro Graphics is what all the talk is about with regards to their future, there are many people who deal with Matrox on a regular basis who are having this discussion right now.

And from the discussion in the Matrox forums alot of people who have many Matrox graphics card in their system have already started transitioning to ATi and nV products because the talk of a Matrox solution came too late for them to test Vista RC1 and their early Betas. While VISTA isn't the be all and end all, and neither is the 3D desktop, losing commercial clients who are finally moving from Win2K to Vista like half the PCs where I work about pcs under my direct line of sight [and it's not Matrox QID Pro Graphics my 'job', just the only one who can talk to the suppliers on a tech level]Matrox being caught wrong footed on this is just shortsighted.

Check the Matrox forums and look at all the defectors, most don't want to leave, but the software programs just don't suppport the old Matrox cards, and of course the gamers are almost all long gone save for the Matrox QID Pro Graphics monitor gamers who have no other options without buy 2 products the triple monitor 2 go and then a gaming card, even that is becoming attractive compared to terrible gaming driver support. And I say this as a Matrox booster, Matrox QID Pro Graphics problem is that it looks like even they don't want to be in the graphics card business anymore, and without another product announcement soon, it's really hard to say otherwise. 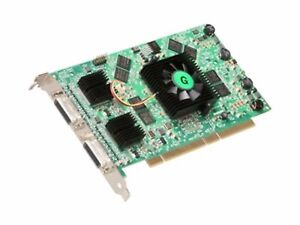 With that AA that the Parhelia had, the image quality, and inovations, they should still be in the bussines. I think that perhaps now that microsoft has unified DX10 setings, and Vista will be using a lot of 3D power, they got the incentive to develop a new GPU, so I wish.